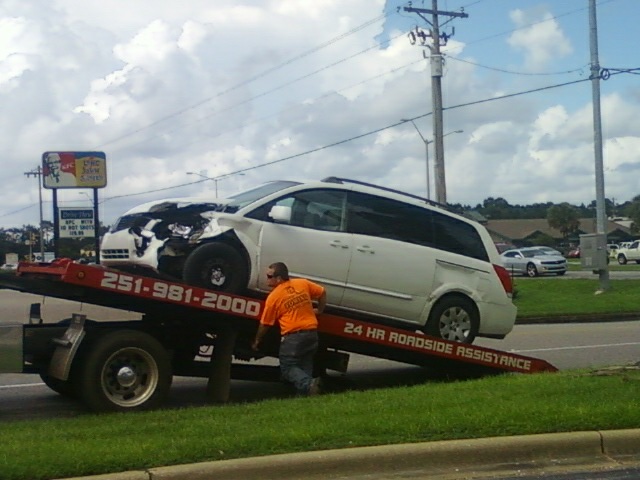 Have you been in an accident? Not sure of what to do about your car seats? One of our admins walks you through her experiences after being in a severe collision with her children on August 11, 2013.

Megan and her three children were in a multiple impact collision. It was a new experience for all 4 of them, and they hope that it is a once-in-a-lifetime occurrence!

Everyone was safe, and she truly believes that a lot of credit needs to go to the properly used car seats.  They gave their lives for her children's safety!

Here is a letter from Megan, explaining her experience for car seat replacement.

"Not many people know that most car seat manufacturers require seat replacement after any type of collision and even fewer people know that their car insurance should cover the cost of car seat replacement, so it's not surprising that many insurance companies try to avoid the cost. After our collision, we called our insurance company to file a claim. We were asked multiple questions about our vehicle's damage, and the occupants inside. We were never asked about the kids' car seats. When the agent asked us if we had any questions, we asked about car seat replacement. We were told to "bring the seats to the adjuster's attention when he looks over the vehicle, and he can inspect them." When we explained that the manufacturer requires replacement even if there's no visible damage, we were again instructed to just show them to the adjuster.

The next day, we met with the claims adjuster with our vehicle. Sadly, our beloved van was determined to be totaled, with an estimate of at least $15,000 in damage. We asked the adjuster about our car seat replacement. He told us to "look over the belt path area of the seats, and if there's no kind of damage that you can see, they'll be fine to continue to use." Had we been the "average parent," we would have gone on our way with that, and continued to use the seats. We looked at them and the belt paths on all three seats looked pristine. It's scary to think that a seat that went through such a severe collision could look like it just came off the store shelf. Luckily, with our knowledge of car seat safety, we were able to inform the adjuster of the manufacturer requirements. We explained that there could be internal damage to any of the seats that would cause them to fail in a future incident, and that it's not a gamble we were willing to take with our children. He eventually agreed to replace the car seats. He gave us a check that day for their estimated cost based on printouts from an online retailer. (I came prepared, and already had looked up each seat in order to print out a copy of their price!) He gave us instructions for replacement, including sending a copy of the receipt for each seat to the claims agent, as well as returning the crashed seats to them for proper disposal. It's frustrating to know that they have a process for destroying crashed seats, and it still took over 20 minutes of conversation before he even agreed to replace them! My biggest tip for this process is to be respectful, but STAND YOUR GROUND!

We ordered replacement seats and while we were waiting, we got curious. Our seats looked perfectly safe. We couldn't see any damage. *Could they really be okay?* We decided to "investigate" a little bit, and we disassembled all of the seats. One booster seat still showed no damage even after we took it apart, but we know that there could still be internal weakening of the plastic. We were shocked to find visible damage on the other two seats, though! Had we not taken them apart, we never would have known! The booster seat's head restraint foam had a large indentation from where my child's head hit it. The convertible seat, that had been used rear-facing, showed damage to the shell around the right side of the anti-rebound bar attachment, as well as damage to the rebound bar itself. There was a piece of the shell that was completely bent and cracked. We continued to take apart the seats and label them as dangerous to use. In case there is some kind of delay in the insurance company destroying the seats, we wanted to make sure no one could mistake them as something useful. They have done their job." 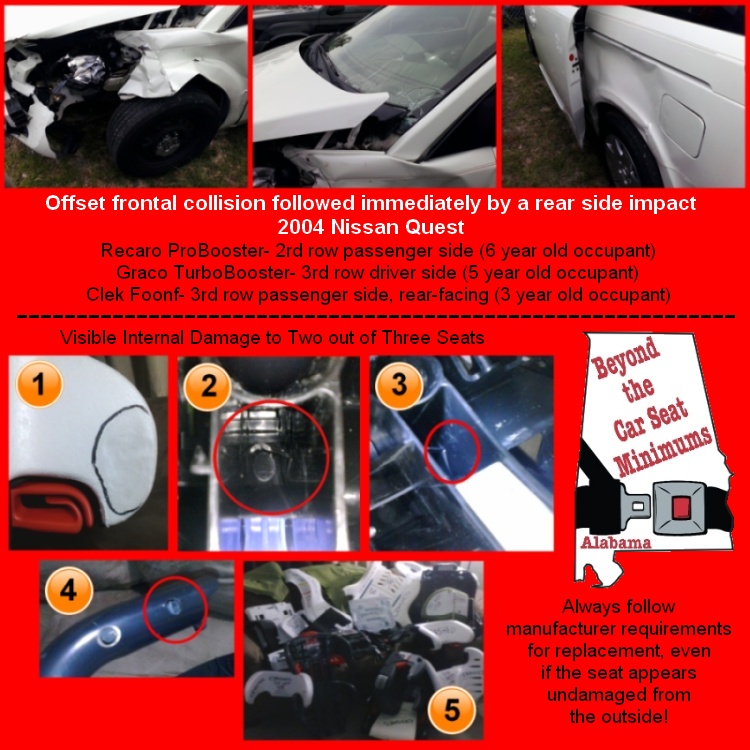 1- Dented foam on the right side of the head restraint of the Graco TurboBooster.

2- Bent and broken plastic by the anti-rebound bar attachment on the Clek Foonf.

3- Bent and stressed plastic by the anti-rebound bar attachment on the Clek Foonf.

4- Damage to the anti-rebound bar of the Clek Foonf.

5- All three seats, disassembled and ready for destruction!

Thank you, seats! You did your job well!

Oops, you forgot something.

The words you entered did not match the given text. Please try again.